Over the years, a common obstacle put in front of chemists has been the ability to construct molecules with medium sized ring structure in a high yielding and selective fashion. These higher order cyclic systems have a variety of problems synthetically with low levels of regioselective, chemoselectivity, stereoselectivity, and high levels of strain inside the scaffolds. There are very few examples of larger than six-membered rings easily synthesized using classic cycloaddition methods such as Diels-Alder and variants thereof. Recently, it has become very attractive for synthetic researchers to employ transition metal catalysis in the construction of these larger ring systems. Specifically, seven, eight, nine, and ten-membered rings prove to be intriguing targets due to their structural complexity and biological activity. Wender and coworkers were one of the first groups to utilize rhodium catalysis with vinyl cyclopropanes to generate seven-membered cycloheptenones.1 Much later Yu and co-workers developed methodology to utilize both ene-yneene derivatives and benzocyclobutenes under rhodium catalysis to achieve similar reactivity to generate seven and eight-membered rings in excellent yields.2,3 At the same time, the Guo and the Zhao groups had developed methods to accesses, seven, eight, nine, and ten membered rings with copper, silver, and palladium catalysis with moderate to excellent yields.4,5,6,7 Despite these advances, it remained a challenge to induce enantioselective processes under these conditions. Guo and Zhao thoroughly investigated using their palladium methodology if introducing chiral phosphine ligands could promote facial selectivity. It was found that altering the environment around bidentate phosphine and ferrocenyl ligands the same products could be obtained in good yields and in high enantiomeric excess. The most notable of these findings of the products formed via palladium catalyzed [6+4] cycloadditions could be funneled through formation of one of three different cycloadducts as the major product. To rationalize the selective formation of these three unique products, DFT calculations were performed and it was found that each product resulted from both differences in kinetic barriers and stability of intermediates at equilibrium. These studies have begun to open the door for more ways to readily access these higher order scaffolds by obtaining information that allows one to get around the typical problems that are inherently present. 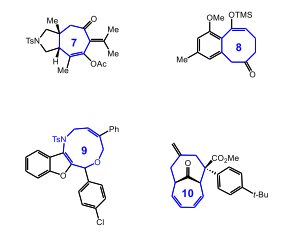 Head of the Department: Prof. I. Jonathan Amster